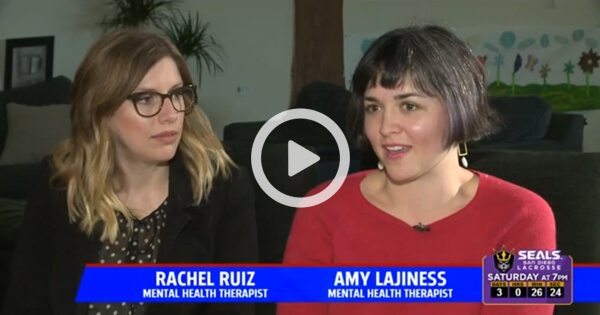 If you don’t know it and you’re a parent, you better learn it. Scripps Ranch High School Principal Nicole Dewitt says it’s everywhere.

“It’s an epidemic at all middle and high schools across the nation,” said Cynthia Laudenslager, vice president of the school’s PTA, the Scripps Ranch High School Foundation. She believes parents who work all day would be surprised at what they’d see driving along Mira Mesa Boulevard after school, calling the number of students she sees vaping “shocking.”

All of these women are on the frontlines in the battle against teen vaping: a principal, a parent and a pair of school mental health therapists. They say vaping is now as much a part of youth culture as a smart phone.

Laudenslager, a parent of teenagers, couldn’t believe the stories she kept hearing in carpool about vaping at school. Kids would tell her they “can’t use the bathrooms” at their school because it’s filled with smoke from kids vaping and “it’s a big drug fest.” After years of hearing the same thing, she decided to find out if it was true. She raised money through the foundation to hire some drug dogs to sniff out the problem at Scripps Ranch High School. The results were immediate.

Students say vaping is as easy as a quick trip to the bathroom between classes and unlike tobacco or marijuana, the odor won’t give them away. A teacher walking by might smell something as innocuous as bubblegum. That’s because there are more than 15,000 flavors of “vape juice,” as students call the liquid, that’s in the pods or cartridges they inhale. The flavors range from lemon to watermelon to donuts to crème brûlée. It’s the flavors that California health officials believe attract the kids, based on the state’s campaign “Flavors Hook Kids,” but educators on campus say it’s more than that.

Dewitt says students trade flavors and use them as social currency. “Who has the latest flavor” is a cool factor that students often boast about, share with others or post on social media. The flavors can even mask THC or other things that might be in the vape juice. Adding to that, the devices themselves can be hard to identify. The most popular brand among teens, JUUL, looks a lot like a USB drive and even charges like one. Teachers have been known to think it’s nothing more than a flash drive when they see it in class, while other brands like the Suorin or Novo might fit in the palm of your hand or be small enough to fit inside a wallet. Some e-cigarette devices are even smokeless, making them even harder to detect. That’s why a new trend is students actually vaping in the classroom and seeing “who can get away with it behind the teacher’s back.”

When the drug dogs alerted Dewitt to the extent of the problem on her campus, she decided to take a different approach from just suspending students caught vaping or with vaping paraphernalia. She partnered up with a local nonprofit, Mending Matters, that has a program aimed at teaching kids about vaping as well as providing mental health therapy. On a student’s first offense, they can opt for two four-hour sessions with the program’s school mental health therapist, who spends that time talking with students — teaching them, but not lecturing. The therapists say “the last thing any teenager wants to hear is another adult telling them what to do.” They say today’s students are savvy and smart and giving them information and empowering them to make their own decisions has led to more long-term success than a simple punishment. When suspended from school, students may often vape at home, miss out on class and the suspension gets put on their record. With Mending Matters, they also discover why students are vaping and say that may lead to further sessions if the student needs additional support with things going on in their lives.

They also have information for parents to learn how to talk to their kids about vaping. Ruiz says parents should normalize the topic of vaping with their kids because it’s normal in their world. If they find their child is vaping, there’s information on their website about what to do next. As for the students caught vaping at school who come to their sessions and start out reluctant, 99 percent of the time tell them they enjoyed talking with them – something the therapists say is high praise from a teenager.

A Lifeline for San Diego Students

Suicide rates on the rise in San Diego County

To Our Students Past and Future,

Thank you. Thank you for showing up, for having the courage to share your thoughts, and for your trust. Every step we take, we remember your stories. Know that each interaction has shaped who we are at Mending Matters and that you made a difference. Each time you showed up, whether to a program or a therapist’s office, you taught us something. We hope you know that we listened. We took the feedback seriously. If you notice us forgetting why we do this work, let us know! Your voices are our guides. You are the reason Mending Matters exists—and we want every space and every program to reflect that. We can’t promise you an easy journey but we can promise to pay attention. To use what you tell us to build spaces that embrace you in all you’re going through.

If you can remember one thing, it is that you are Mending Matters. You deserve the time and opportunity to reflect on the challenges you are facing and the support to overcome them. We are humbled to be a part of your story.

With gratitude,
The Mending Matters Team